Alex has worked at E.L.A.C since May of 2016. Growing up, he has always wanted to work in the animal field. He loves working with all species of animals. He also enjoys going home to his ''fur baby'' China, who is a 5 year old yorkie and will be adding a new addition very soon! He looks forward to learning more and be a strong and knowledge additional to the East Lake family.

Melissa has worked at East Lake Animal Clinic since 2006. She loves helping animals in need! Besides dedicating her time to helping furry friends, she also enjoys painting, being active and spending time with her five furry babies .

Stacey is originally from Hemet, CA and has only lived in Salinas since 2012. Her and her husband fell in love with the area and recently bought a home in Hollister. She graduated and received her licensing from Bel Rea Institute of Veterinary Knowledge in 2005. Stacey has been in the vet field since 2002, starting off her love of helping animals volunteering at local shelters. Stacey loves spending her spare time with her husband and cat, Pudder.

Samantha has been in the animal industry for over 14 years. She grew up participating in FFA and 4-H. She has been at East Lake Animal Clinic since July of '06 starting from a kennel technician and worked her way up to hospital manager. She is very committed and passionate about her job. She enjoys spending her down time with her fiance, brand new baby girl and her fur babies.

Mayra has been a team member at East Lake Animal Clinic since 2013. She has four dogs, four cats and is hoping to get a goat this year. Mayra has been an avid animal lover ever since she was a little girl. She enjoys the outdoors and loves spending time with her family's horses. 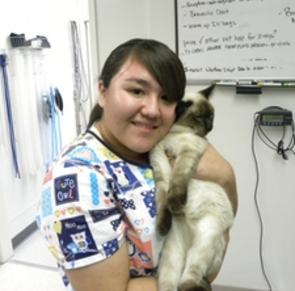 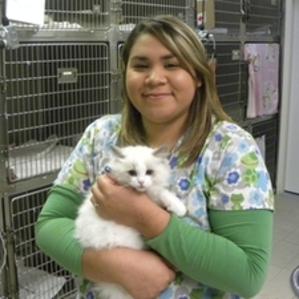 ​Mayra was born and raised in Watsonville Ca, she has been a part of ELAC since Sept 2017. She has a passion for animals and enjoys being able to help. Proud owner of a 4 year old Husky/Shepard mix named Bentley, who she loves taking on long walks on the West Side of Santa Cruz. Mayra completed her Veterinary Asst course at Gavilan College and would like to continue her education as a RVT for large animals.

Kenya started here at East Lake Animal Clinic in 2005. She is extremely passionate about animals and loves helping them in any way she can.

She has 2 dogs and 3 cats that she loves dearly. She enjoys spending her spare time with her daughter and family.

Nancy has lived in Watsonville her entire life. She grew up surrounded by animals so it was no suprise when she chose to work in the Veterinary Field. She has four dogs and a cat who she loves very much. She hopes to go back to school and become a RVT.

Laura has been a resident of Watsonville since she was born. She enjoys art, reading but, one thing she enjoys the most is being a doggy mom. She owns a dog named Nyla who thinks she's a cat. Laura is very loving and compassionate when it comes to our furry friends. She's been part of the ELAC team since July 2015.

Alexandra was born and raised in Watsonville. She recently became a part of ELAC in Oct 2017. Growing up she realized she had a love for animals so she decided to pursue a career as a RVT. On her spare time Alexandra enjoys riding horses and helping her father with there farm animals at their ranch.

Lingi was born here in Watsonville in 1995 and joined E.L.A.C January 2017. Being a Cabrillo College student, Lingi is currently majoring in Dance and is stepping out of her dance shoes to try something new. Working hard as ELAC's kennel assistant, she looks forward to learning more and continting to be a valuable teammate to the clinic.

Michelle was born and raised in Watsonville. She started working at ELAC end of May 2018. She recently graduated from The Veterinary Assisting Program At Central Coast College in Salinas CA. She is working on becoming an RVT. Michelle is a proud mom of a 5 year old little girl and a furr child named Charlie.